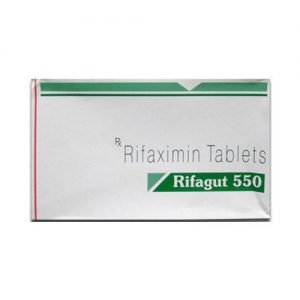 Rifaximin is a drug that is used to treat infections. It relieves symptoms including agitation, confusion, and muscular issues in hepatic encephalopathy by killing the ammonia-producing

bacteria. It works in infectious diarrhea by inhibiting the growth of the bacteria that cause it.

Infectious diarrhea and hepatic encephalopathy are treated with rifaximin.

Rifaximin as a Treatment for IBS

Irritable bowel syndrome can be treated in a number of ways (IBS). The usage of the antibiotic rifaximin is one that is becoming more widespread. The purpose of this blog is to simply explain why this medicine is widely prescribed, how much it works, and what to think about before taking it. This is not my own opinion, nor is it representative of what I would advise my IBS clients to do. Instead, this is merely a translation of the findings so that you can determine how to approach your healthcare providers.

It is important to understand IBS before we talk about how the medication works. IBS is a functional gut brain disease defined by changes in the function and communication in the intestinal system. Bloating, abdominal pain, gas, diarrhea and/or constipation are among the most common symptoms. One of the most common gastrointestinal disorders diagnosed, 10-15% of the population have it. The diagnosis for IBS is based on symptoms, so the diagnostic process can be a bit challenging and a diagnosis can often overlap or misdiagnose with other conditions. No single cause but chronic stress, changes in the microbiome (different causes for this), and infection are considered the most common causes. There is currently no cure, but typically symptoms are controlled by dietary changes, changes in lifestyle and/or by the use of supplements.

Rifaximin is an antimicrobial synthetic (man-made) agent poorly absorbed. The agent is a wide spectrum targeting microbes in the intestines. Rifaximin is more active in the small intestine and less active in the large gut because of its high bile solubility (colon). This is good because of the large gut of our microbiome. The problem with most antibiotic uses is that they can wipe away our microbes, which can lead to an altered immune system and to a problem called dysbiosis. One of the main issues with IBS is dysbiosis.

Since the rifaximin targets the small gut, it is commonly used to treat small intestinal bacterial overgrowth (SIBO). SIBO is a condition that leads to a growth in small bowel fermentation, resulting in painful bloating, distention in the abdomen and foul gas, due to the bacteria from the large intestine in the small intestine. This can cause diarrhea for some as well. SIBO has some causes, including chronic constipation, intestinal injury or surgery, and the use of certain drugs.

Besides SIBO, rifaximin is also an effective treatment for travelers’ predominant IBS diarrhea and diarrhea (IBS-D). In studies, symptoms of recurring diarrheal, gas, pain and bloating have been shown to be reduced. It is not clear whether these results indicate that these patients were overgrown in bacteria, but certain studies have suggested that IBS-D patients may have large quantities of bacteria in the small intestine. We have yet to learn more and how to detect excess growth to more effectively treat IBS.

The course of treatment with Rifaxamin varies according to the reason. In general, travelers’ diarrhea is taken for 3 days, IBS 2 weeks and SIBO 10-14 days. For IBS, rifaximin is often used because the risk of bacterial antibiotic resistance doesn’t appear. It may be used often. Your doctor would prescribe this.

Rifaximin costs are the biggest problem. It can be very expensive, and although insurance covers some of the costs, it can usually be covered by many limits. This might lead to a longer wait to start the drug and could be a barrier for those who can’t pay for the copay or have no insurance.

Another problem is that chronic rifaximin is not clear on the long-term effects. Some studies report that fungal or bacterial infection is at increased risk, including clostridium difficile (c-diff). Other studies do not report any side effects and claim that chronic use is safe. No risk of liver injury or toxicity appears to be evident in evidence.

The known side effects include gas, diarrhea, rectal tenesmus, nausea, headache, dizziness, fatigue and swelling in the hand or feet. You should talk to your doctor about this.

You should always talk to your doctor about possible short and long term effects from using any medicines, so you can be confident about your choice.