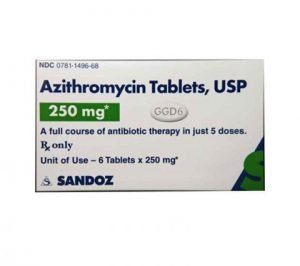 The medicine is available as tablets, suspension, and extended-release suspension from Indian sources. Azithromycin is also available in the form of an intravenous solution and eye drops.

Azithromycin is an antibiotic that can be used to treat infections of the respiratory system, the throat, sinuses, and the skin.

Infections of the chest and urogenital tract can also be treated with it.

With a large network of distributors and exporters in India and internationally, GM-Global is one of the top-rated Azithromycin manufacturers.

Azithromycin is an antibiotic that kills bacteria and inhibits them from reproducing. As a result, there has been a considerable reduction in infection.

The following ailments have been found to benefit from it in terms of prevention, control, treatment, and improvement:

Pharmacology and the Mechanism of Action

It eliminates the bacteria and prevents them from reproducing, reducing the symptoms.

Azithromycin suppliers and exporters like the 250mg and 500mg varieties because they are the most popular among doctors.

Here are some of the most prevalent medication adverse effects. If any of these symptoms persist and worsen, they must be immediately reported to a physician.

It is critical that Azithromycin wholesalers in India are aware of the potential side effects of the medicine. These details should also be communicated to medical professionals.

If the drug has a history of allergies, doctors must be aware of it. They should also be aware of any pre-existing illnesses or medical problems, such as pregnancy.

If there is a planned surgery, the doctors must be informed. Conditions like decreased liver function or pseudomembranous colitis must be disclosed ahead of time.

An antacid containing aluminum and magnesium salts should be avoided for two hours after receiving Azithromycin.

The medicine should be taken exactly as prescribed by the doctor. The dosage is determined by the intensity of the problem.

If an abnormal symptom persists or worsens, the doctors must be notified.

Unless it is unavoidable, the medicine is not suggested for pregnant or breastfeeding women.

Reach us on WhatsApp
1