what are the causes of brain cancer?

Home - Uncategorized - what are the causes of brain cancer?

what are the causes of brain cancer?

Blurry vision, Nausea, a change in the consciousness, ability, memory, speech, or personality of a person; Vomiting, Hallucination in some patients

The most common primary brain tumors (including brainstem cancers) that they originally developed are generally named for brain tissue type.

Astrocytomas (for example, an astrocytoma is a brain cancer made up of abnormal brain cells known as the astrocytes), oligodendrogliomas, ependymomas, and plexic choroid papillomas have several subsystems. Astrocyte glioblastomas usually result in highly aggressive (malignant) tumors.

What are the kinds of brain cancers?

Even if they come from the same sort of brain tissue, not all brain tumors are the same. Tumors are graded based on how the cells of the tumor appear under a microscope. The cell’s growth rate is also determined by the grade. From the most benign (grade I) to the most aggressive (grade IV), the National Cancer Institute assigns the following grades:

Because brain malignancies rarely spread to other organs, they are staged according to cell type and grade.  These cancer stages often range from 0 to 4, with stage 4 indicating that cancer has spread. 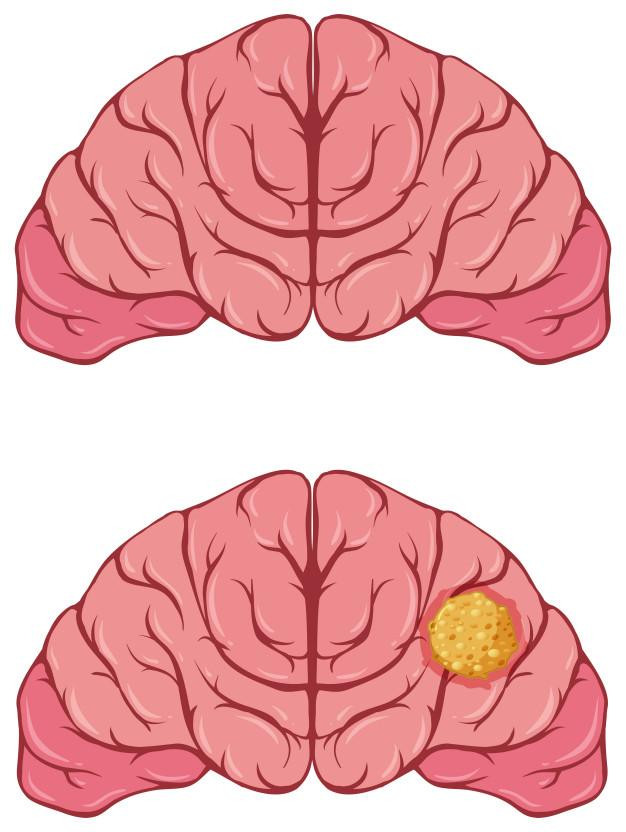 Many forms of brain tissue can cause primary brain tumors (for example, glial cells, astrocytes, and other brain cell types). The spread of cancer cells from one body organ to the brain is known as metastatic brain cancer. However, in both metastatic and primary brain tumors, the origins of the transition from normal to malignant cells are unknown. Researchers have discovered that persons who have certain risk factors are more likely to acquire brain cancer.

People with risk factors including working in an oil refinery, handling jet fuel or chemicals like benzene, chemists, embalmers, or rubber-industry workers had greater risks of brain cancer than the general public. Although some families have many members with brain cancer, there is no evidence that inheritance (the genetic transmission of features from parents to children) is a cause of brain tumors. Other risk factors for brain cancer have been hypothesized but not verified, such as smoking, radiation exposure, and viral infection (HIV). There is no proof that brain cancer is communicable, or that it is caused by head trauma or cell phone use.

Is it possible to prevent the development of brain cancer?

Even though there is no method to avoid brain cancer, early detection and treatment of tumors that tend to spread to the brain can help to lower the risk of metastatic brain cancer. Radiation to the head, HIV infection, and exposure to environmental contaminants have all been suggested as probable risk factors for primary brain tumors.  However, because no one knows the exact causes of brain cancer, particularly primary brain cancer, there are no specific preventive interventions available. Whereas websites and articles in the popular press say that macrobiotic diets, not using cell phones, and other approaches can help prevent brain cancer, there is no trustworthy research to back up these assertions.

The treatment of certain types of brain tumours in adults is given in combination with radiation therapy. After other treatments have failed, temozolomide is generally given. Temozolomide may also be used for purposes not listed herein.

Temozolomide is only available if the doctor has prescribed it for brain cancer. Ask your doctor to know and understand more on this.